“Soon – with the permission of God – being confronted with the war of the prisons” (or let’s say prison-wars) by the as-Sahab Media productions.

Being captured or in prison is a essential element in the jihadi literature and ideology – in the famous sawt al-jihad there are numerous articles about the struggle against the enemies and the possibility of falling in the hands of the authorities. The ‘prison-element’ has numerous meanings, besides the constant threat in most arab states for most citizens to be subjected to the local authorities, the jihadis can count on the experience of the ‘scholars’ who were imprisoned in 1995 when they issued their memorandum of advice to the saudi government. These ‘scholars’ (besides other examples) have set a modern prison aspect, a modern example of a Gallileo as descriped by Brecht – recant your writings and be free or stay firm and remain in prison under torture.

Those who stand firm in prison and suffer under tortute and miserable conditions are heroes – with a very psychological effect: God has granted them firmness and has consolidated them, because of their belief and their deeds for the religion. But it is important to differentiate between writers, socalled scholars, and actual fighters, mujahidin.

Prison danger for the mujahidin: when escaping or retreating fail, there are logically only two options remaining: victory or death (in the texts one often reads to receive one of the two beautiful things, wich is either victory or dying for god and thus attaining the shahada). But what happens when the fighter falls alive in the hands of the authorities? Example from Saudi Arabia: In the numerous statements there are countless examples that those fighters who are captured continue their jihad, are being tested by God on a higher decree.

When scholars are captured and later released or freed, there are quickly new PDF documents online to download and read their experience. At the beginning of 2002 the saudi authorities slowy began reacting to the beginning terror campaign by the al-Qa’ida cells and started to work out some counter-terrorism strategies. The above mentioned scholars who were arrested in 1995 had of course some protection: they are known in public and are being respected by great parts of society – so the regime had to deal with them. Nasir al-Fahd, who later issued a fatwa legalising the use of nuclear weapons against the US, recanted his writings publicly on TV and after he was freed recanted his recantations and stated that the temptations set by God to separate the true believers from the less true belivers are part of the wordly human existence on.

Consider this short info a preview, when as-Sahab has published the video I will post substantial information on how imprisonment is actually being considered in the jihad literature, besides the prominent example of Nasir al-Fahd the story of Faris az-Zahrani (Abu Jandal al-Azdi) delievers very good insight on how the prison-factor is dealt with. 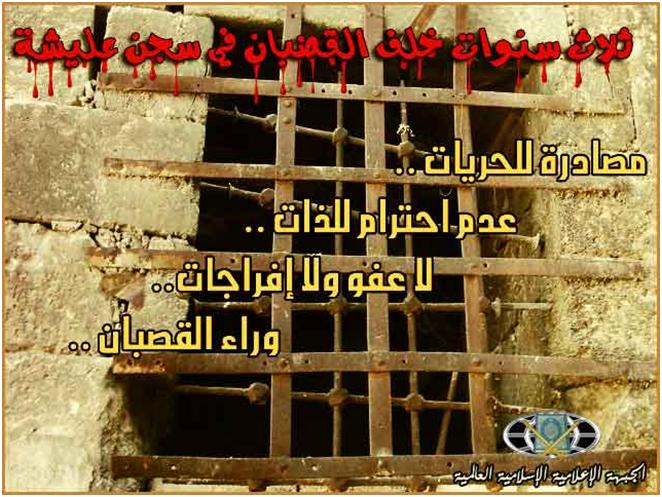