With the ongoing “ghazwat al-asir” campaign by the Islamic State of Iraq to revenge imprisoned Muslims (hence the name of the operations “Prisoner”) it has now reached its fifth operation. The recent suicidebombing attacks against embassies in Baghdad had been claimed by ISI in a usual rhetoric and manner, but this has now been expressed in a picture uploaded by one of the jihadist forum members to underline his

The campaign started with devastating suicide attacks in Baghdad and has since not decreased in intensity or violence. As the German, Iranian and Egyptian embassies had been struck, the flags appear in the picture depicting the ISI operation as direct revenge for worldwide imprisoned Muslims and that are governments conspiring with the authorities of the Green Zone. ISI released a video two weeks ago entitled “ghazwat al-asir, part I”, which may be the beginning of a new ISI video series (as of “fursan al-shahada” that consists now of 7 lengthy movies showing testimonies and attacks of suicide bombers). 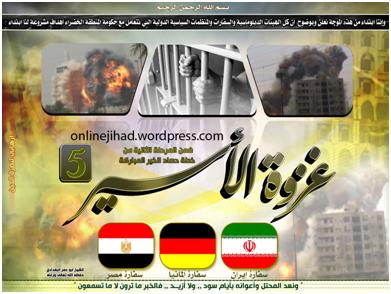 A note on the source of the picture:

The “Terrorist for the Victory of Religion” felt compelled to create the picture “for a long time. I haven’t submitted a jihadist picture” but was working on it while gained some experience with programs – may it have been Photoshop? But the operation did inspire him to that extend, “that I rushed on working with the programs to create a picture for the blessed operation.”

As you can see, he has chosen his avatar carefully, just as much as the signature of his postings:

One thought on “ISI embassy bombings in Baghdad”