The little known group by the name Jaysh al-Mujahidin (the army of the mujahidin) claimed today in several internet forums to have downed a black hawk helicopter. What starts as a couple of muj posing in the iraqi mourning sun with their weapons – later in the video 2 helicopter arrive, 1 apache and 1 black hawk. As the “clash” starts, basically you see and hear the muj firing their guns aimlessly at the targets, they muj claim to have shot or forced the black hawk down – as marked with the red circle. But, there is no smoke development and if you ask me the black hawk is simply landing. The end is marked by a wreckage of a chopper on the ground – hard to tell if the wreckage is recently or now. But there is one, maybe that’s what counts, as it says “one of the wreckages of the black hawk helicopters”. 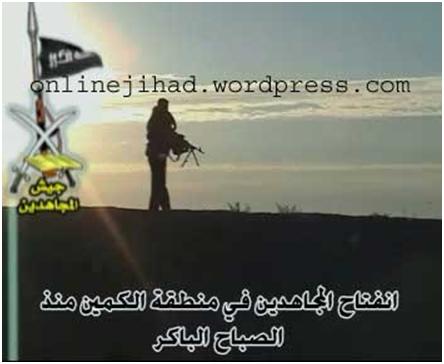 The mujahidin open the ambush area since the early morning

Making the downing of the black hawk visible, everyone on board was killed – the masters of Nuri al-Maliki

The wreckage of one of the black hawks on the ground [just where else?], north of Baghdad