Much has been revolving around the alleged AQ threat to attack the 2010 World Cup. While various sources claimed the origin of the threat was issued in a statement clearly broadcast by the African AQ branch, AQIM, others did not clarify this issue at all.

The problem is, that the validation of the source can be clearly attributed to AQ’s ongoing online jihadist endeavor that is quick to issue empty threats with greater effect, but the threat in direction of the World Cup in 2010 has been issued in a clear language with precise naming of the most favored soccer teams. But that may not mean much, I caution the reader to recall the fuzz that evolved after notorious Bekkay Harrach issued his threat message that something will happen two weeks after the German elections. Nothing happened. Germany has been ever since more in the focus and the jihadist anonymous online ranting but AQ didn’t bother to comment on the absence of the promised attacks. Rather, the online sympathizers had a good time posting on how the German government just spend millions of Euros for nothing while “imagining security that cannot be provided” according to the jihadists dreamers.

The threat this time was not issued in a involuntary funny video like in Harrach’s threat but in a 2 page long article in a online jihadist magazine entitled “al-Musthaqun ila l-Janna”. In the meantime this is edition number 5 of a magazine based publication that started in October last year when it dedicated its first issue to the annihilation of Jund Ansar Allah by Hamas in the Gaza Strip (see my blog I posted plenty of stuff on that subject). Also a graphical reaction on Harrach’s threat is portrayed. While the first edition already stated that its a new online jihad based magazine to inform the umma and report the truth and so on, the fifth edition now seems of being a special on AQIM, as the cover already indicates: 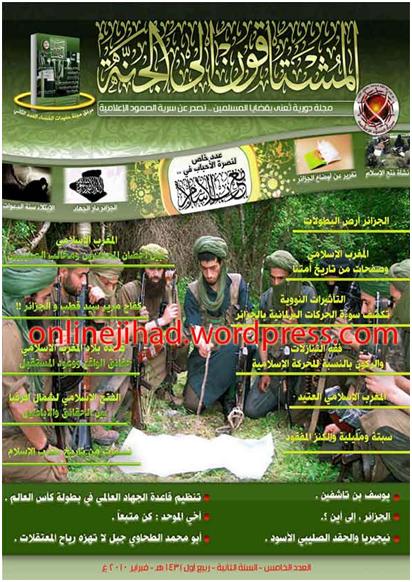 As indicated on the cover the reference to the article is already made: “The global AQ organization in regard of the World Cup”.

The article itself is written by Ibada bin al-Samat, who depicts the World Cup as “part of the ongoing campaign of the Crusaders against Islam.” Underlining arguments are that Muslims are being prevented to move out into jihad by being stuck in front of the TV set due to the soccer events. Furthermore, each individual soccer player is violating the monotheistic foundations of God, as people may be more inclined to praise their favorite soccer player then God… basically a very easy and quite polemic article, nothing new out of the jihadists hard disk here.

The logic is, while Crusader forces are killing innocent Muslims, two countries meet on the soccer field. So what will the media report? The games are made up anyway, so “America may grant Algeria to win [on the soccer field]!! Then the Arab country will feel a great victory over America. The country that supports Israel, that occupies Afghanistan and Iraq and rules over the Arab Peninsula. America, the country that prevents, bans, kills and wages war!!”

The article then goes on the brag that AQ will be able to smuggle explosives despite all the security measures into the stadiums, just as it was able to get the wanna-be suicide bomber Faruq with explosives onboard a US bound aircraft and just as much as Assiri, the wanna-be sucidebomber assassin was able to get his explosives into the office of Saudi Prince Nayef. Just as much Abu Dujana is being praised, who “fooled the mightiest intelligence agency in the world and who killed senior CIA agents as well as their Jordanian colleagues.” A multitude of jihadists perception is deployed to imply that the World Cup 2010 is not safe and that 50 grams of explosives would be enough just as in the case of Faruq.

An attack on the World Cup would of course have the impact the jihadists are hoping for and which is part of their strategy. “Dozens, hundreds would be killed. 50 grams are sufficient for such an operation. All security measures will fail including the body-scanners America will install after having read this article. They won’t find out how we get the explosives into the stadium.”

The groups A, D and F are highlighted, as these are countries of special jihadist interest: France (A), Germany (D) and Italy (F). “All of these countries participate in the Crusader-Zionist campaign against Islam. (…) We will bring the war into your stadiums.”

Page two of the article is accompanied by a picture of a dead child, killed in Indonesia, where “Muslims have been forgotten and are suffering under the Christians.”