Unlike AQ, IS controls swathes of territory in the Sunni Arab heartlands, primary in Iraq and Syria; despite loss thereof after its power peak. The theology which was largely theoretical in the case of AQ is now applied in full by IS – making the “state” a real and attractive alternative where the imaginative “real-Islam” promoted by AQ has now become a reality with IS and embodied by the “caliphate upon the prophetic methodology”. Sunni extremism – as much as any religious form of extremism or orthodoxy – is driven by an absolute belief in God whereas the application of absolute formalized religious rule is the desired final objective (and the only solution to minimize the threat of living in a state of sin, which would send you to hellfire). For over three decades, jihadists in their own words, both in writing and on film, have been yearning for the creation of an Islamic State and, ultimately, the return of the Caliphate. The power of the self-designated “Islamic State” nurtures on this desire, and the extremist tradition of calling for this restoration of power, as a driving force and an identity marker.

The application of theological concepts written since the 1980s gives IS the power to claim to have restored the “abode of Islam” (dar al-Islam) and clearly demarcate who is a Sunni Muslim and part of the Sunni community – and who is not. Apostates or traitors, who thus are excommunicated (takfir) and executed as alleged spies[1] or “wizards” who conduct black magic[2], homosexuals who are dealt with as “the people of Lot” and pushed from rooftops to death[3] signify a clearly implemented theology IS openly advocates online – and enforces offline.

“Islam” has been restored and is now embodied by the “state”. In their own words, responding in September 2015 to the refugee crises, IS presents itself as the only legitimate zone where Sunni Muslims can exercise their duties to God accordingly as,

“the whole world, from east to west, became dar al-kufr, the “abode of the disbelievers”. Therefore God set in motion the establishment of the Islamic State. This state consists of numerous elements that make it dar al-Islam. Therefore, the rule of shari’a law returned as well as the implementation of physical punishment (al-hudud),[4] cutting off the hands of thieves, punishing adultery by stoning to death and beheading wizards. The establishment of the Islamic State as a reaction to those who commit injustice, governed by “commanding right and forbidding wrong”[5] while driving a jihad against the disbelievers – thus the might of the Islamic community has been restored. Muslims living in the state openly manifest the rituals of their religion[6], not fearing anything apart from God – therefore the state of Islam is the abode of Islam in this era. It is obligatory for every Muslim to support and protect it, to openly display dissociation and enmity to the enemies of the Islamic State.”[7]

For IS this means there is only one Islamic state in the world and it is every Muslims’ obligation to support this project. The element of applied theology, however, is often expressed in IS videos where the filmed executions or applied punishments are backed by writings. An execution video released on October 18, 2015 from the IS-province (wilaya)[8] Nineveh shows a mujahid armed with a sword mounted on a horse chasing towards a prisoner kneeling on the desert ground. The executioner arrives in a setting deliberately re-enacting the early Muslims on a raid, being a murabit, a horseman ready for war while spiritually tuned to defend his territory and being willing to enter paradise.[9]

A 13-page-document released about a year later by the Ashhad Media foundation took a screenshot of the October 2015 video to project visual coherence[10] to those who have seen the movie: this is a theological booklet justifying and explaining “the ruling on those who support the rafida [derogatory for Shiites] against the Ahl al-Sunna”, written by Abu ‘Ali al-‘Iraqi.

Al-‘Iraqi alludes to what is generally applied in such IS execution videos – the Sunni jihadist argumentation concerning who has pledged loyalty to God and who has violated this pledge. It engulfs the concept of “dissociation” (al-bara’) from disbelievers and the absolute loyalty (wala’) to God that was made popular by AQ ideologues, including writings by Osama bin Laden.[11] In the video, several men are beheaded for their betrayal of the ahl al-Sunna (as embodied by IS) as they are accused of having conducted espionage against Shiite militias and the Iraqi government, considered a Iranian-Shiite proxy by IS. As the “caliphate” has been re-established, the obligatory pledge of allegiance (bay’a) to Abu Bakr al-Baghdadi means per definition that all loyalty is to God, via al-Baghdadi, as the human representative (khilaf) in the “state” (dawla).

As second sample of applied theology spread via Telegram are the hundreds of IS videos showing the amputations of hands. 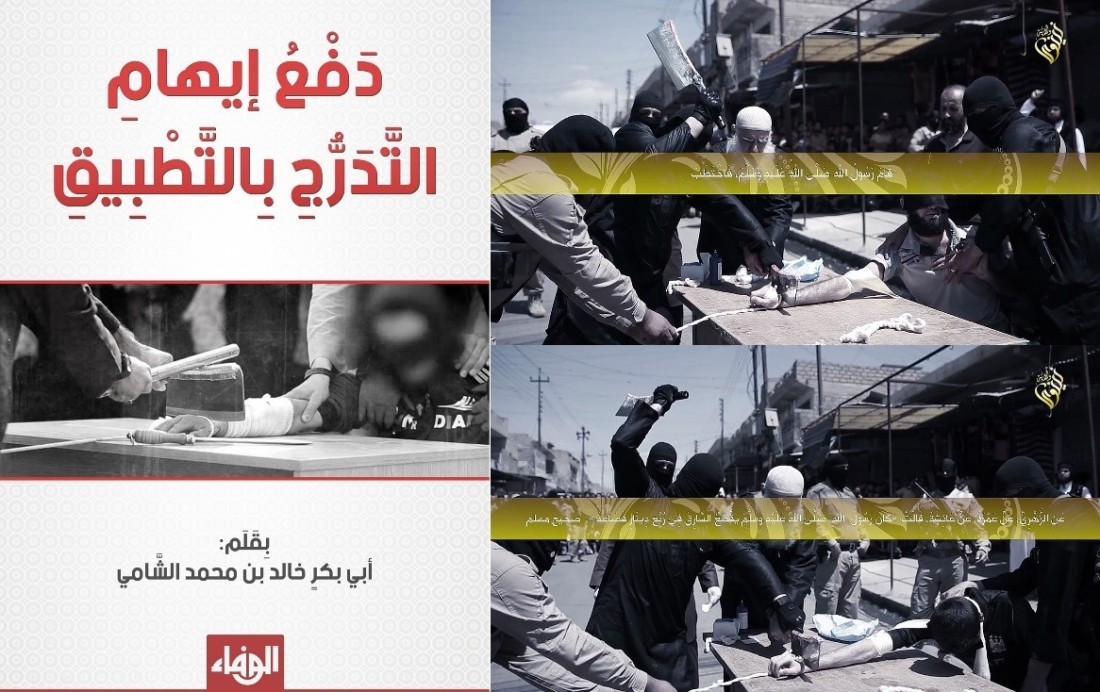 On the left, a cover of a 20-page- book gives the readers a detailed analysis on the permission to exercise physical punishments against transgressors.[12] The arguments are exclusively referring to historical scholars, selected passages from Qur’an and Sunna as well as precedents from historical role models.

On the right side are two screenshots from the video “the ruling of the creator (God) upon the thief”, released by the IS province Nineveh in mid-2015.[13] They show, prior to the act of amputating the two thieves hands in public, religious references appearing as texts to sanction and fully validate this act of punishment according to sharia law. This is a highly appealing message that IS wants to exploit in its videos: the “Islamic State” is based on religious scripture and thus is the only true community of Sunni Muslims, and: IS is acting on behalf of God.

[1] For example: Tahalafuhum wa-irhabana, wilayat Nineveh, July 20, 2016 shows the execution of alleged Kurdish spies by French foreign fighters who avenge killed civilians resulting from airstrikes and praise the lone wolf attack in Nice. The attack on Bastille Day by a lone wolf driving a truck into crowds on the Promenade des Anglais resulted in the death of 86 people.

[4] i.e. the amputation of hand and/or feet as punishment for crimes. This form of jurisdiction is also documented by IS videos to showcase being a functioning state: iqama hadd ‘ala sariqayn, wilayat gharb Ifriqiyya, November 2, 2015.

[5] IS has released several documents and videos, sanctioning and showing the destruction of, for example, Shiite mosques, churches, Yazidi shrines, graveyards, or the total obliteration of pre-Islamic statues as well as museums housing these artifacts. “Commanding good and forbidding evil” is the theological legitimacy for the Islamic police, who apart from safeguarding the Sunni integrity by systematically removing sites of veneration that violate the Sunni extremist theology also police communities and, for example, ensure the illicit trade and consumption of tobacco is persecuted. For details: Nico Prucha, Reformatting Space: The Self-Proclaimed “Islamic State’s” Strategy of Destroying Cultural Heritage and Committing Genocide, European Union National Institutes for Culture, http://washington-dc.eunic-online.eu/?q=content/reformatting-space-0, November 2015.

[6] Which had been previously banned or could only be taken care of in secrecy under secular Arab regimes to avoid being arrested for possible Islamist oppositional work.