A couple of days ago as-sahab published another video. An immense IED has been planted and it appears that at lest 5 PMC’s have been killed in Afghanistan. The camera has been positioned some distance away and it is hard to say, but its definetely not the US military that was choosen to be hit, although the 4×4 carrying the mercenaries (or whatever you may or may not call them) was going along with some US mil Humvees, the 4×4 was the target and not any of the vehicles which obviously were US mil.

The Mujahideen of the islamic Emirate [Afghanistan] start building the bomb 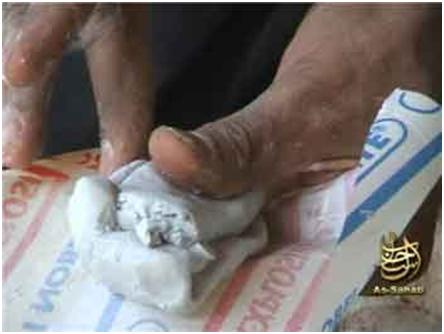 The target – 4×4, as known by videos from Iraq to carry mostly national Police, mil units or PMC’s. Keep in mind that this vehicle is part of a columm of vehicles of which most are US mil (Humvees).

“Thanking God for th result of this operation, the muj slaughter (same verb used to cut peoples head off) a lamb”

Something I haven’t witnessed in any of the jihad videos.

More stuff soon – got some tech prob’s –don’t forget to use the donate button .