According to the al-Quds news magazine, that states Reuters as a source, the father of the CIA Forward Operations Base bomber Abu Dujana al-Khorasani, known by his real name Humam Khalil Malal al-Balawi, is convinced that it is indeed his son in the video. The video was disseminated earlier and shows Abu Dujana next to Hakimullah Mehsud in a video eulogizing and calling out to avenge the killed Taliban leader Baytullah Mehsud.

“The father Khalil al-Balawi said that he was deeply hurt when he saw his son in the video earlier today, assuming that the US repression against the Islamic world and injustice turns any person into such a behavior mode that the Americans are killing innocents and children. 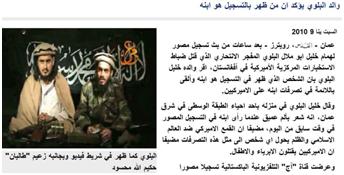