First a Youtube audio message surfaced, then some hours later a ‘proper’ statement was issued. Here is a translation:

“During a time, where the evil of the Jews, Christians and apostates has allied with one another, they attack Islam and its people on every territory.

In a time in which the sons of France, the servants of the Americans, cooperate and support them in the tasks of [fabricating] lies against the mujahidin, thus a joyful message is sent by us to the Muslim umma – the success of the Mujahidin in realizing two different operations, within the territory of Nigeria.

The second operation: On 22 January the Mujahidin were able to kidnap four European tourists, in Nigeria:

The statement then goes on to claim that the hostages will be treated according to sharia law and Islam – and that the fight for the umma and the Muslims, against the tyrants, will continue. It is signed by the “Media Council of AQIM, 18.02.2009.” Pictures follow: 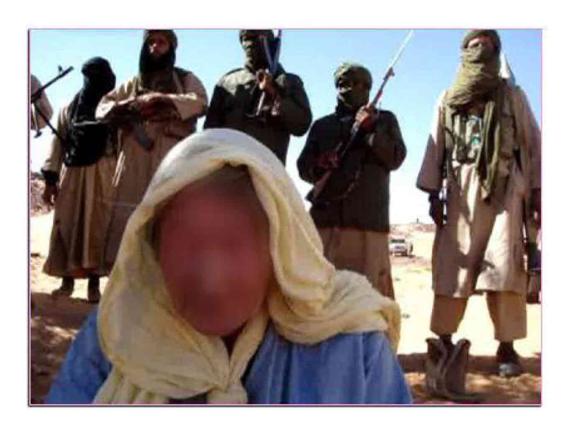 Women are, as in the case of the kidnapped Austrians, rendered unrecognizable

The latest al-Qa’ida statement from North Africa, AQIM, is simply a memoranda of their recent operations and task. So it is not really interesting, as most of these “news flashes” contain the usual, such as claiming to have attacked military convois of the Algerian government with the results being listed and so on.

Interesting about this specific memorandum however is, that following the title, we read the following:

” Praise be God, who said: “Fight them! God will chastise them at your hands, and He will lay them low and give you victory over them, and He will strenghten the chests of those, who are believers.” Peace and” etc.

Well, that is close, but it is rather the 14th verse of the 9th sura. The 9th sura, the surat at-tawba, the “repentence”, is one of the suras which is frequently cited in parts by the various jihadis and plenty of ideological material written by the “Godfathers of jihad”, including ‘Abdallah ‘Azzam, have 9:111 as a basis for their rhetoric and arguments regarding the neccessity to wage jihad on “the path of God” and so on.

Point is, that the jihadis and their numerous sympathizers quickly bark at all those who they believe are misguided and they firmly believe that they are “the people of the truth”, being tested by God in a universal fight of “good vs. evil” – and whenever they make a grave mistake such as this one, the jihadis are very quiet indeed.

The statement was issued as a posting in the forums – published by al-Fajr.

There have been several developments in Algeria recently, which I neglected to lack of time.

However, the “organization al-Qa’ida in the western islamic countries” has published a 23 page strong WORD document about a week ago, which will be subject of a future post. This document seems to be a very long justification for the recent major suicide attacks on the governmental building in Algiers. I will check it and let you know.

In addition to the dokument a video emerged today, showing the (roadside) bombing of several military vehicles. A video which reminds me of the everyday al-furqan IED attacks on US Humvees. Screenshots and some information will also be published in the near future. – sending donations my way would of course help –

Some time after the announcement that the GSPC has merged with al-Qa’ida a very professional made video surfaced in the internet by the title “The Hell of the Apostates, part 2”. Part 1 is of similar contend and has the identical layout, however part 2 is just way better made and consists only out of 1 file (464 mb).

After the February 14th release of the series “the Shades of the Swords” I have found many similarities to the mentioned series “The Hell of the Apostates” – in both videos the same layout appears and it seems that the same person(s) have created these videos.

This is a still from the latest video; after the ambush on a army unit, the Mujahidin have taken several weapons and ammunition as well as other equipment as booty. The booty is an important thing for the salafist, as they believe to follow Muhammads example and the quran (sura at-Tawba and al-Anfal) by doing so.

“Booty of the Mujahidin in this raid: machine-guns, ammunition and phones/ communication devices. 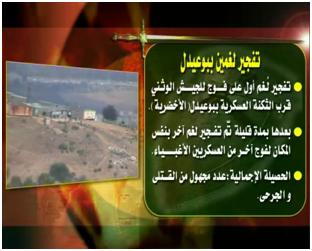 Also inbetween scenes there are overviews of what is to come. Here for example there is the title (explosion of two mines) and the following categories:

Type, what is to come and whats the (alleged) result.

Whenever there is a clip or a scene of a new assault, there is always the seperator with the texy layout and information shown.

To compare that to the series “the Hell of the Apostates”:

Just as above, there is the booty of the Mujahidin after this raid: 09 machine-guns, ammunition and communication devices.

place/ target/ booty for the Mujahidin

“Ambush and five bombings”, from the series “shades of the swords”, has the same layout as an older movie, which had been aired after the “public merging” of the then called GSPC and al-Qa’ida (see post: Algeria: The Hell of the Apostates).

This jihadvideo must be seen in the context of the recent developments in Algeria:

This video shows, among other incidents, the roadside bombings of a troop transporter. The last two transporter stop, the first one seen in the picture obviously flees the scene – following the military verhicles which have already passed – the soldiers then start to leave the transport and take cover (red circle).

The caption reads: “The apostates during their gathering close to the second bomb.”

Picture No.3 shows the explosion of the second bomb – while the jihadis watch and film from a safe distance.

This is just a scene of the video. It starts with a Mujahidin unit heading to a firefight with the algerian army – after minutes of firefighting, several bodies are shown as the Mujiahdin collect weapons, munition and equipment (see also the comparison with the series “the Hell of the Apostates”). 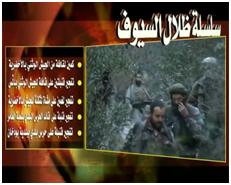 Here is the table of contents (short version:

– Ambush on a unit of the idolatry-army

– bomb attack against a leader of the national guard

– bomb attack against the national guard