Throughout the Summer of 2016 apparent lone wolf attackers struck in France, Germany, Russia[1] and the U.S. The attackers acted on behalf of the “Islamic State” and in most cases selfie-styled videos had been made and uploaded to IS media operatives of Amaq Agency (wakalat al-‘Amaq). The short videos followed a classical Jihadist modus operandi, with the exception that these had not been foreign fighters, but rather either local French, American citizens, or as in the case of Germany, refugees from Syria or Afghanistan. Omar Mateen, U.S. citizen born in America, attacked a night club in Orland, Florida in June 2016, leaving 49 people dead and 53 injured.[2] Jihadist users on Telegram had been quick to disseminate pictures of Omar Mateen – after these had been released by the mainstream media – to praise the attacker as a martyr and a “soldier of the caliphate.” A trend on Telegram quickly emerged to refer to such attacks under the hashtag “in your homes”, a reference to the jihadist understanding of the division of world into “dar al-Islam” (abode of Islam) and “dar al-kuffar” (abode of disbelievers). As French, American and other nation’s combat aircraft continue to bomb IS, the “dar al-Islam”, IS seeks to inspire and theologically guide attackers such as Omar Mateen to conduct revenge operations in the “depth of your abodes” (fi ‘aqr diyarikum), as the Arabic hashtag for “in your homes” advocates. Whatever the jihadists produce for publication, always is theologically coherent.

The Syrian refugee who failed undertaking a suicide bombing attack in Anspach, Germany, as well as the Afghan refugee who at random stabbed passengers on train in the region of Würzburg had filmed their final statements beforehand. These statements are – just like the 9/11 “martyr’s” videotaped farewell message or the 7/7 bombing attackers last words – the testimony (wasiyya) as much as a legacy. Allegedly, Telegram was used to communicate from within the caliphate with at least some of the attackers who then in turn used the app to upload their self-filmed wasiyya. This video was then edited and branded with the Amaq logo and released to the IS Telegram community with the intention that the swarm with fan it out to other online sites and platforms for maximum visibility.

The value of continuing its successful influence operation has driven IS on Telegram to dedicate media channels and media operatives to translating and producing new content for a specific French, German, Italian, English, Russian, and Bahasa Indonesia audience. All of these non-Arabic materials are theologically coherent with the universe of over 30 years of Sunni jihadist writings and videos. This is not new, and was also part of AQ’s strategy to draw potential recruits in via the Internet, but IS has formalized the process having the advantage of time, money, territory and dedicated resources to elevate this process. This has led to a two-fold production line: (i) official and (ii) user generated content. Together, these packages carry a range of messages which focus on the importance of the individual to take action. They highlight the ethos captured in the ‘Open Source Jihad’ as set by AQ’s English language magazine “Inspire” where barriers to entry are low and anyone can contribute. For example, they encourage individuals to realise that not all attacks have to be complex coordinated operations, nor use sophisticated weaponry, nor focus on a specific high profile target. Instead they articulate that anyone can strike a blow for the Islamic State. A video, for example, published by IS in April 2015 entitled “Hunt the Safavids” a French suicide bomber speaking in French (with Arabic subtitles) eulogises Muhammad Merah, the Toulouse shooter and clearly phrases what ideologues have authoritatively stated for many years: hijrah is an obligation, however if one cannot physically join jihadist movements in the Middle East and elsewhere, attacks are a legitimate substitute. Both actions grant the individual entry to paradise, the objective that drives Sunni extremists worldwide.

On November 26, 2016, IS released a video in French with Arabic subtitles. The video was published by Furat Media, a dedicated IS-media institution that produces content for non-Arab(ic) audience. As always video is in 16:9, full high definition, and features eulogies and praise for the span of lone wolf attackers in 2016. The film, entitled “Sur leur pas”  demonstrates vividly how IS uses and perceives Telegram for their purposes. 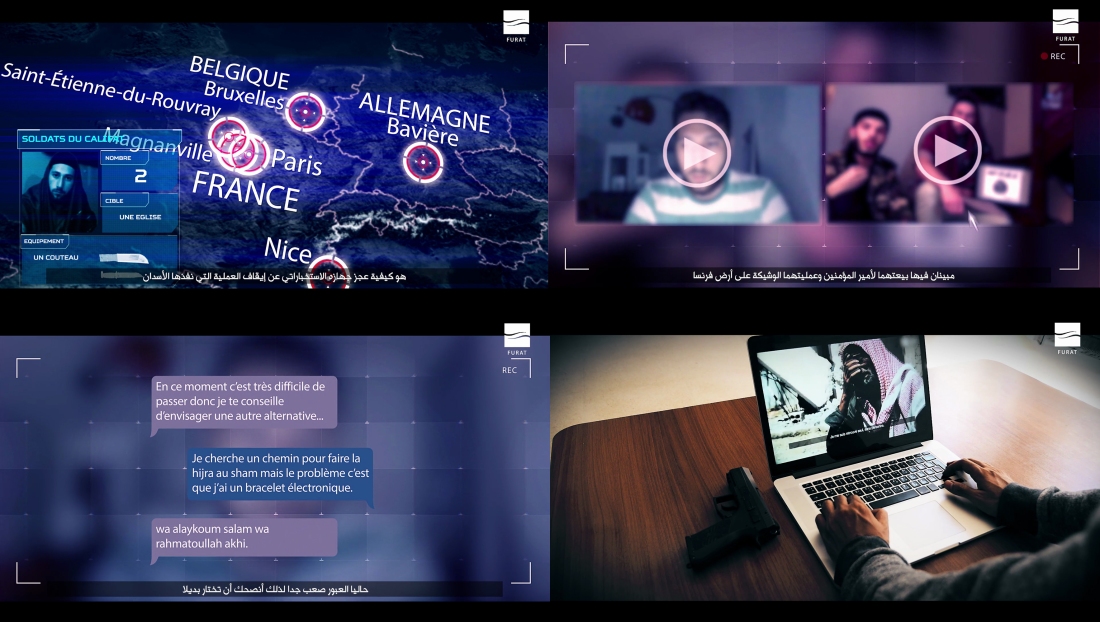 Screenshots of the video highlighting attacks, assailants and encrypted communication on Telegram.

Assailants are introduced and areas of attacks highlighted. Combined with mainstream media footage of respective attacks, IS boosts these as revenge operations and part of the “Islamic State” ‘foreign policy.’ Telegram chat exchanges claim to ‘document’ that some of the aspiring IS fighters had expressed the wish to conduct the hijra and join IS, but had been warned this being to dangerous. Rather, their intention can be translated into conducting attacks in their home countries instead of risking arrest for seeking to emigrate to Syria or Iraq. The final screen shows an elder Arab man crying over the death of his family and destruction of his home as a consequence of coalition bombing sorties against IS. A young man with his side arm ready watches the French language subtitled Arabic video and then shuts his MacBook to exercise revenge and restore dignity for the Sunni Muslim community.