One of al-Qaeda strong points is its constant presence as a media group online. With plenty of sympathizers absorbing AQ propaganda videos and writings, it may be no surprise that these sympathizers generate their own content as an reaction and as a response to current and general AQ related broadcastings.

Here are some pictures of the wanna-be suicide bomber Farouk:

One bad, bad example… poorly cut out and compiled…

Farouk with Assiri, the suicide bomber who tried to kill Saudi Prince Nayef in August 2009; he also used a new bomb device, was able to board an airplane to Jeddah and to bypass the Prince’s security installments. He failed to kill the Saudi interior minister but succeeded in killing himself.

Part of this picture is the logo of the Islamic State of Iraq in the top middle. 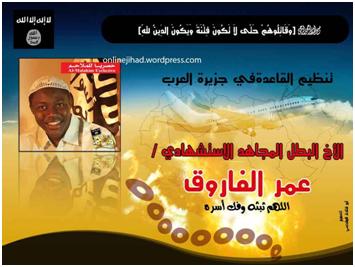 And another example – note the ISI logo and another picture taken from the written original statement.