It is not new that the active and theoretical jihadis – and all their sympathizers and followers – who are members on most of the radical online forums invite and demand from all members in general to participate in disseminating the propaganda that was issued by groups such as as-Sahab, al-Furqan, ISI, AQIM or what have you. A member calling himself Umar ‘Abd al-Hakim issued a posting within the al-Faluja forum on the 24th of November where he explains to the community how to upload videos on youtube. Of course, he is calling out to every member (who naturally have plenty of these videos, mostly downloaded from links issued within

these forums) to undertake the necessary steps and flood youtube with plenty of this propaganda material – as this is part of the Islamic da’wa, in order to multiply what the jihadis believe is legitimate material to reach fellow Muslims and also non-Muslims who then can – again, in the mind of the jihadis – be confronted with the “truth” and ideally join “Islam”. After providing parts of the usual hardcore propaganda, al-Hakim asks that the “raid on youtube – why and how?” has to be undertaken and provides some screenshots to make the explanation as easy as possible. The most practical part, so it seems so to me, is that the provided screenshots simply show how to upload any video, even if your English sucks.

So far, that’s just a detailed instruction and the usual ideological frame that underlines the need to act and provide help.

A note on the Mumbai attacks: users also called out and asked “how is it possible for me to participate with my brothers, the Deccan Mujahidin in the raid on Mumbai?” and answeres his own question by posting solutions such as distributing information taken from various sources in non-jihad forums, by using youtube and by publishing pictures and films on sites such as videogoogle et al. 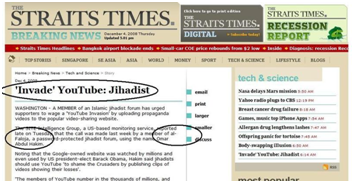 On December 6th another member, calling himself in English “Wanted Insurgent”, of the forum issued a new posting with various screenshots of various sites of newspapers such as the French “Le Point”, “Le Monde”, the Turkish “Dunya” that the posting of al-Hakim has hit the news.

The jihadis are quite skillful when it comes to watching western media sources and are quick to pick up plenty of trails.