“Ambush and five bombings”, from the series “shades of the swords”, has the same layout as an older movie, which had been aired after the “public merging” of the then called GSPC and al-Qa’ida (see post: Algeria: The Hell of the Apostates).

This jihadvideo must be seen in the context of the recent developments in Algeria:

This video shows, among other incidents, the roadside bombings of a troop transporter. The last two transporter stop, the first one seen in the picture obviously flees the scene – following the military verhicles which have already passed – the soldiers then start to leave the transport and take cover (red circle).

The caption reads: “The apostates during their gathering close to the second bomb.” 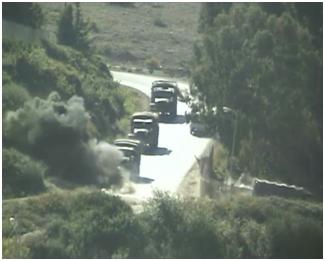 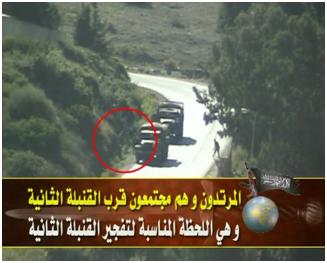 Picture No.3 shows the explosion of the second bomb – while the jihadis watch and film from a safe distance. 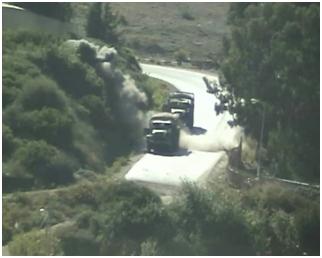 This is just a scene of the video. It starts with a Mujahidin unit heading to a firefight with the algerian army – after minutes of firefighting, several bodies are shown as the Mujiahdin collect weapons, munition and equipment (see also the comparison with the series “the Hell of the Apostates”).

Here is the table of contents (short version:

– Ambush on a unit of the idolatry-army

– bomb attack against a leader of the national guard

– bomb attack against the national guard